Thank you for joining us at our annual Showcase Symposium to learn about research being done at the Allen Institute for Brain Science through innovative, team science approaches.

The 2019 Showcase featured presentations, team talks, posters and interactive sessions with scientists from the Allen Institute for Brain Science as well as from our Next Generation Leaders, distinguished early-career scientists from institutions across the world. 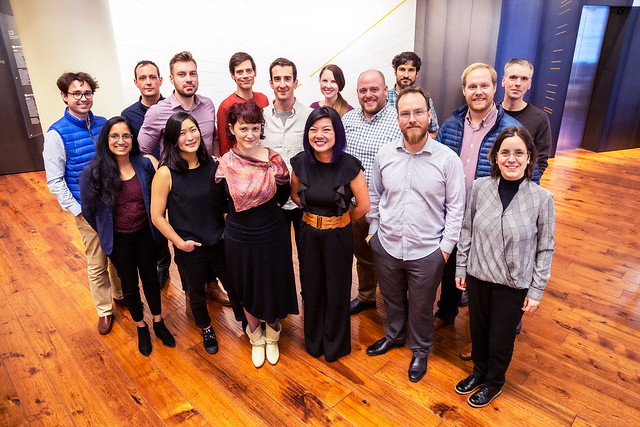 Over the past 15 years, new tools have emerged for studying synaptic networks in the brain. The Allen Institute is among the first to generate serial-section EM datasets that contain complete cortical circuits imaged at synaptic resolution, with dense segmentations by our collaborators at Princeton. Complete, accurate and permanent data sets are coming online, creating the need for analytical tools to create knowledge from the data. Recently, our team has built a suite of database tools to annotate and explore EM segmentations, leading to (1) increasingly refined cell classes defined by both morphology and connectivity and (2) quantitative analysis of specific synaptic pathways. Similarly, we are beginning a light-microscopic analysis of white-matter projections, which should yield rich, densely segmented maps of long-range connectivity. I’ll discuss several fundamental questions in mammalian neuroscience that these two approaches might answer definitively, from characterizing the relationship between cell types and network structure, through testing theories of network computation.

Vertebrates emerged more than 500 million years ago, and colonized water, land and air. Despite their diverse life histories, vertebrates share the same overall brain architecture, which is established during early embryonic development. Are correspondences, or homologies, extending beyond coarse brain regions, to the level of cell types and circuits? To address this question, we are studying cell types in the telencephalon, a brain region where the dramatic expansion of neuronal diversity in evolution is associated to morphological and functional novelties. We used single-cell transcriptomics to identify cell types in the simple three-layered cortex of reptiles, the sister group of mammals. Our quantitative comparison of single-cell transcriptomes across species sheds new light on the evolution of the mammalian six-layered neocortex. The transcriptomic signature of glutamatergic neurons in reptilian cortex suggests that mammalian neocortical layers are made of new cell types generated by diversification of ancestral gene-regulatory programs. By contrast, we find that the transcriptomes of cortical GABAergic neurons are conserved to an exquisite detail, suggesting that developmental or functional constraints shape the evolution of these cell types.

The human brain is composed of diverse cell types across brain regions that enable unique capabilities. In the cerebral cortex, the outer layer of the brain that provides for advanced cognitive function, these cell types emerge from an initially uniform neuroepithelia. Using single-cell sequencing, we have characterized the differentiation, maturation and area-specific trajectories of human cortical development. Interestingly, we identify outer radial glia-like cells in single-cell sequencing from primary glioblastoma tumor resections, and also validate these observations with time-lapse imaging. These findings suggest important preservation of developmental trajectories between normal development and cancer development. Experimental manipulation of these primary human cell populations will require in vitro models; we have compared cell types from primary developing human cortex to cerebral organoids. We observe that in vitro models of cortical development strongly recapitulate broader hierarchies of cell identity, but clearly do not possess identifiers of cell subtypes that exist in normal human development and up-regulate cellular stress pathways. Moreover, the contrast to organoid cell types indicates that broad cell type can be sufficiently directed in vitro, but that subtype specification at the earliest stages of development is regulated by conditions that are not present in the organoid.

The brain can be described by its wiring, neural activity, and genetic makeup. Each of these components is critical for enabling the brain to function as a regulator of animal behavior. To enable the recording of all three types of information simultaneously, we developed a platform using a light- and activity-gated tool FLARE, projection-specific optogenetic activation, and single-cell RNA sequencing. We use this platform to study how glutamate inputs to a subregion of the nucleus accumbens (NAc) drive aversive behaviors in mice. Our tool is modular, allowing us to express any reporter gene in NAc neurons activated by glutamate during a 10-minute stimulation and recording period. This short time window is an order of magnitude faster than existing tools using immediate early genes and drug-gating. By driving the expression of a red-shifted opsin in NAc neurons activated by glutamate inputs, we gain the ability to functionally manipulate an anterogradely-labeled population of neurons. Furthermore, the presence of the reporter gene in the transcriptome allows us to determine the cell-types of the activated neurons using single-cell RNA sequencing. Together these experiments revealed a single NAc cell-type that is preferentially activated by glutamate inputs and can functionally drive aversive behaviors.

The trend in neural recording capabilities is clear: we can record orders of magnitude more neurons now than we could only a few years ago, and technological advances do not seem to be slowing. Coupled with rich behavioral measurements, genetic sequencing, and connectomics, these datasets offer unprecedented opportunities to learn how neural circuits function. But they also pose serious modeling and algorithmic challenges for the next generation of computational and statistical neuroscientists. How will we develop probabilistic models for such heterogeneous data? How will we design models that are flexible enough to capture complex spatial and temporal patterns, yet interpretable enough to provide new insight? How will we construct algorithms and software to efficiently and reliably fit these models? I will present some of the machine learning methods we are developing to address these challenges.

DNA damage is linked to normal aging in the brain as well as neurodegenerative diseases such as Alzheimer’s disease (AD), however whether DNA damage results in the accumulation of deleterious mutations in post-mitotic neurons during human life and in disease has until recently been unknown. We have pioneered the use of single-cell, whole-genome sequencing (scWGS) to interrogate the genome of individual human neurons, demonstrating that single neurons differ from each other by at least hundreds of somatic single-nucleotide variants (SNVs), and we showed that somatic SNVs accumulate during life across the brain, resulting in several thousand mutations marking neurons isolated from elderly donors. Mutation rates were elevated in genetic progeroid diseases characterized by early-onset neurodegeneration, and displayed a signature of oxidative attack. Our unpublished work applying scWGS to AD patient samples reveals that somatic mutation patterns in AD are differ significantly from those in age-matched controls, suggesting somatic mutation constitutes a universal mechanism of neurodegeneration.

"Distributed coding of choice, action, and engagement across the mouse brain"

Vision, choice, action, and behavioral engagement arise from neuronal activity distributed across brain regions. Using Neuropixels probes to record from thousands of neurons across many brain regions, we have delineated the spatial distribution of neurons underlying these processes. For both goal-directed and spontaneous behaviors, neurons in nearly all regions respond non-specifically when mice initiate an action. By contrast, neurons encoding visual stimuli and upcoming choices in a visual discrimination task occupy restricted regions in neocortex, basal ganglia, and midbrain. Choice signals are rare and emerge with indistinguishable timing across regions. Midbrain neurons code choices unilaterally, whereas forebrain neurons code bilaterally. Brain-wide pre-stimulus activity predicts engagement in individual trials and in the overall task, with enhanced subcortical but suppressed neocortical activity during engagement. These experiments have therefore identified simple organizing principles for the distribution of neurons encoding behaviorally relevant variables across the mouse brain. Future work, in collaboration with Allen Institute investigators, will seek to refine our neural recording devices to improve the detail, stability, and cell-type specificity of our measurements.

The basal ganglia, as well as motor and prefrontal cortices, have been ascribed many roles in the motivation and performance of goal-directed behaviors. However, limitations of the spatial scale of recording and precision of behavioral analyses have hindered our understanding. Moreover, an inability to identify cell type(s) further reduces our ability to discern the computational functions of this circuit. I will present our new tools to overcome each of these issues, and our early discoveries towards establishing the evolving neural dynamics underlying both spontaneous and trained behaviors (reaching). Specifically, we have developed a fully-customizable, 3D-printed microelectode array that soon will be able to deliver drug or light in addition to recording from several hundred channels. Combining physiological insights we’ve learned, the lab has created a mouse in which we can optogenetically identify up to three cell types at once. For open field behaviors, we are pairing this electrode with an unsupervised data clustering algorithm that agnostically classifies three-dimensional actions with millisecond resolution. Finally, I will demonstrate the circuit representations that we have uncovered thus far.