The Paul G. Allen Frontiers Group has had an extraordinary year. New projects and groundbreaking ventures, events that drew attendees from all over the globe and major scientific advances were woven in amongst an ongoing listening tour and efforts to continually expand the frontiers of science. Here are some highlights from the past year.

The Paul G. Allen Frontiers Group announced the creation of two new Allen Discovery Centers, one at UW Medicine and one at Boston Children's Hospital and Harvard Medical School. Each center is funded at $10 million over four years, with the potential for $30 million over eight years. The Allen Discovery Center at UW Medicine will use newly developed technology to create global maps of development that reveal the relationships between the vast numbers of diverse cells that make up a single organism, with major impacts across developmental biology, neuroscience, cancer biology, regenerative medicine and other fields. The Allen Discovery Center at Boston Children's Hospital will use a multidisciplinary approach to understand when and how the uniquely human brain evolved, and identify the roles of genes involved in that evolution.

Learn more about the ADI projects and researchers in our news story.

The Frontiers Group also joined forces with the American Heart Association to support two Allen Distinguished Investigator projects in the frontier field of the extracellular matrix and its role in heart disease. Learn more in our press release.

Frontiers Group-supported researchers featured prominently on lists of awardees for some of the most selective grant awards, including the NIH Director’s Pioneer Awards and the NIH Director’s Transformative Research Awards, where our Allen Distinguished Investigators and Allen Discovery Center leaders comprised an amazing 25% and 38% of the awards, respectively. Read more about this exciting follow-on funding in our news stories.

News from the Allen Discovery Center at Tufts

The Allen Discovery Center at Tufts University made significant strides toward their goal of cracking the morphogenetic code. Watch our video to learn more.

The Frontiers Group hosted several scientific events this year, including the Exploring Frontiers: Connecting Neurodegeneration and Cancer symposium in Seattle and the Allen Frontiers Symposium in San Francisco.

View photos and videos of the events on the event pages and on our YouTube channel. 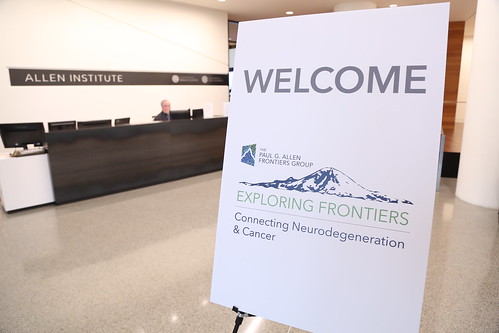 Researchers supported by the Frontiers Group published more than 70 scientific papers this year in numerous journals, including Nature, Science, Cell, Regeneration, Development, Nature Communications, and many more. Read about some of our scientists' advances in our news stories.

For more updates on the Frontiers Group, be sure to subscribe to our quarterly newsletter.