The Paul G. Allen Frontiers Group hosted Dr. Christopher Mason, Associate Professor of Computational Genomics at Weill Cornell Medicine, for an afternoon seminar and reception. Dr. Mason's presentation and photos from the event can be viewed below.

The avalanche of easy-to-create genomics data has impacted almost all areas of medicine and science, from cancer patients and microbial diagnostics to molecular monitoring for astronauts in space. Recent technologies and algorithms from Dr. Mason's laboratory and others demonstrate that an integrative, cross-kingdom view of patients (precision metagenomics) holds unprecedented biomedical potential to discern risk, improve diagnostic accuracy, and to map both genetic and epigenetic states around the world and in real-time. Finally, these methods and molecular tools work together to guide the most comprehensive, longitudinal, multi-omic view of human astronaut physiology in the NASA Twins Study, which lay the foundation for future long-duration spaceflight, including sequencing, quantifying, and engineering genomes in space. 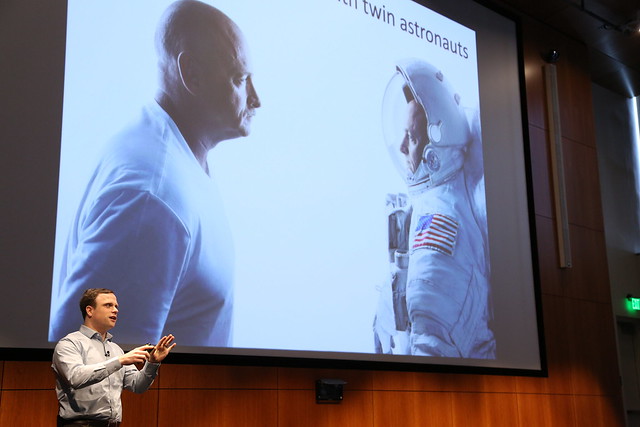 The Mason laboratory develops and deploys new biochemical and computational methods in functional genomics to elucidate the genetic basis of human disease and human physiology. They create and deploy novel techniques in next-generation sequencing and algorithms for: tumor evolution, genome evolution, DNA and RNA modifications, and genome/epigenome engineering. They also work closely with NIST/FDA to build international standards for these methods, to ensure clinical-quality genome measurements/editing. They also work with NASA to build integrated molecular portraits of genomes, epigenomes, transcriptomes, and metagenomes for astronauts, which help establish the molecular foundations and genetic defenses for enabling long-term human spaceflight.

Dr. Mason has won the NIH’s Transformative R01 Award, the NASA Group Achievement Award, the Pershing Square Sohn Cancer Research Alliance Young Investigator award, the Hirschl-Weill-Caulier Career Scientist Award, the Vallee Scholar Award, the CDC Honor Award for Standardization of Clinical Testing, and the WorldQuant Foundation Scholar Award.  He was named as one of the “Brilliant Ten” Scientists by Popular Science, featured as a TEDMED speaker, and called “The Genius of Genetics” by 92Y.  He has >150 peer-reviewed papers that have been featured on the covers of Nature, Science, Nature Biotechnology, Nature Microbiology, Neuron, and Genome Biology and Evolution, as well as cited by the U.S. District Court and U.S. Supreme Court.  His work has also appeared on the covers of the Wall Street Journal, TIME, LA Times, New York Times, and across many media (ABC, NBC, CBC, CBS, Fox, CNN, PBS, NASA, NatGeo). He has co-founded several biotechnology start-up companies, including Biotia and Onegevity Health, and serves as an advisor to many others. He lives with his daughter and wife in Brooklyn, NY.